THIS TOURIST GUIDE IS CHANGING VISITORS' VIEWS OF MALAYSIA 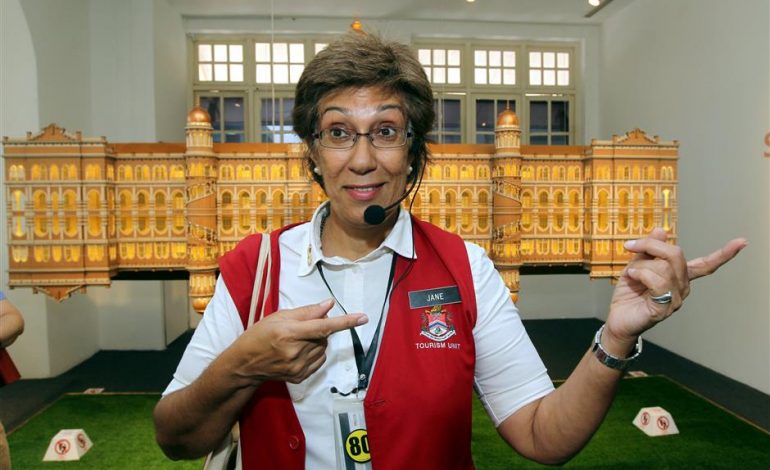 Jane Rai says her job as a tourist guide has made her a much more diplomatic person. Photos: The Star/Kamarul Ariffin

It's a given that one should use the "power of the hand" when crossing busy Malaysian roads. But it's still amusing to see tourist guide Jane Rai explaining that "road etiquette" to international visitors at the start of a guided heritage walk in the heart of Kuala Lumpur.

"Hold up your hand facing oncoming traffic and if the cars slow down, only then do you cross," she explains with a serious expression.

"If you do cross, and the cars don't slow down in time, well …" she trails off and makes the sign of the cross on her chest, much to the laughter of her audience.

Jane is one of the many guides with the Kuala Lumpur Tourism Bureau at the KL City Hall. One might think what tourist guides do is just showcasing the city's attractions and explaining their significance to curious tourists.

But the way the jovial woman in her 50s sees it; she's more of a storyteller - with a bunch of other responsibilities in tow.

"As a guide, we have to be very mindful of the people we are with. When you deal with different nationalities, you have to be aware of the language you use, too," she says, adding that guides also have to consider the safety of the visitors.

What does it take to be a good guide then?

"You really have to be people savvy. You must have the passion to meet people and be able to work long hours," she offers.

It's easy to be awestruck by the extensive knowledge that Jane - as with many other tourist guides - has on the background and history of places of interest.

"A guide needs to have content. You are expected to know a little bit of everything. You have to equip yourself with a lot of knowledge and the way to do that is through research," she explains, as she shows me a book featuring old black-and-white photographs of KL.

While Jane immensely loves what she does, the vocation initially came about as a supplement for her other passion - writing.

"I became a tourist guide because I thought that it would give some credibility to my travel writing," reveals the Kuala Pilah-born woman who had a short stint as a journalist in 1986.

Jane signed up for a course that was held in Kedah in 1988 and hasn't looked back.

"I have never had a dull day on the job. I have learned a lot about people and built tremendous friendships," she gushes, adding that visitors she has guided in the past range from public officials to solo backpackers.

She has also managed to inadvertently change tourists' perception of the country for the better.

"I often hear from tourists their perception and expectation of the country. Sometimes, it's the content they read and the people they meet. But when they talk to you, they hear from you how the communities really live," she says.

The conversations Jane has with travellers have also made her a better person.

"You become more diplomatic and it's such a humbling experience."